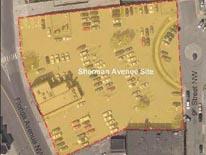 965 Florida Avenue NW (Lot 1102 in Square 2873) is located near the southwestern edge of the Howard University campus in the Shaw/Cardozo neighborhood of Ward 1. It is bounded by Sherman Avenue, NW and Florida Avenue, NW to the west, the Howard Plaza Towers to the north, 9th Street to the east and a privately owned lot to the south.

The property is 63,418 square feet or approximately 1.45 acres in size. The District acquired the property as part of a land swap with Howard University in 2008. Howard University used the site as an employee parking lot, though it has been unused since the trade. There is one small vacant building near the southwest corner of the property.

The solicitation was awarded to the development team of MRP Realty and Ellis Development Group on July 30, 2013. The team proposes to build a mixed-use development with approximately 400 residential units of which 120 units are planned for residents earning 30% and 50% of Area Median Income (AMI). The project will also include a Whole Foods grocery store on the ground floor and, in accordance with the DUKE Small Area Plan, the developer will build, operate, and maintain a new public street on the north side of the site connecting Florida Avenue to 9th Street, NW.

The Council of the District of Columbia approved the surplus and disposition of this property on September 22, 2015.