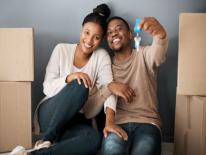 In Washington, D.C, the homeownership rate for Black households is 34 percent compared to nearly 49 percent for White households based on US Census 2019 American Community Survey. Additionally, according to a Urban Institute analysis, a first-time homebuyer with the average income of a first-time DC Black household could afford just 8.4 percent of homes in the District sold between 2016 and 2020, compared to a buyer with the average income of a White household, which could afford 71 percent of these homes.. Since then, the residential real estate market has experienced a sharp rise in home values, making it increasingly difficult for native Washingtonians to afford and be competitive in purchasing homes.

The Strike Force is made up of government and public experts in housing and financial counseling, lending/underwriting, real estate development and services, as well as representatives from the faith-based, senior, immigrant, and LGBTQ+ communities and advocates and representatives that address social and racial equity.

Mayor Bowser announced the Strike Force will be co-chaired by Anita Cozart, Interim Director of the Office of Planning, and Rev. Graylan Scott Hagler, Senior Minister of Plymouth Congregational United Church of Christ. In addition, the following members will also serve on the Strike Force:

Mayor Bowser has tasked DMPED with coordinating the work of the Strike Force and preparing members with relevant data and research. It will be staffed by DMPED and supported by researchers and analysts at Urban Institute and Howard University, with facilitation and engagement support provided by Justice Sustainability Associates. In addition, plans are underway to engage residents who have used District homeownership programs to purchase their first home but also those who have sought to buy a home and have yet to achieve this goal. Opportunities under consideration include outlets to share their stories, experiences, and ideas and feedback regarding District programs and other related challenges to achieving homeownership in the District. Additional details regarding public engagement will be shared in the coming weeks.