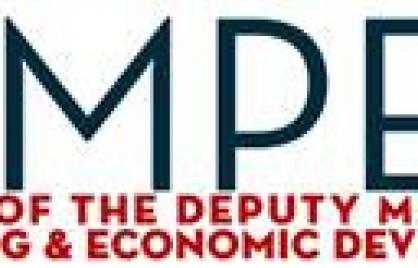 “My administration is committed to giving all Washingtonians a fair shot,” Mayor Bowser said. “The projects announced today will not only create greater transparency and economic opportunity, but give local businesses, residents and communities a chance to share in the District’s progress. I am excited to work with them as we shape our city’s future.”

The Office of the Deputy Mayor for Planning and Economic Development (DMPED) announced five new projects available for development, including:

“When I took office nearly a year ago, I pledged to expand affordable housing, create job opportunities for District residents, and bring more retail to District neighborhoods. These projects further that commitment.  I look forward to working with our agency partners to ensure these projects meet the growing needs of our communities,” said Deputy Mayor Kenner.

Mayor Bowser and Deputy Mayor Kenner were joined by the Department of Housing and Community Development (DHCD), Deputy Mayor for Education (DME), Department of Parks and Recreation (DPR), Department of General Services (DGS), District of Columbia Public Library (DCPL), and the new Office of Public-Private Partnerships (OP3) to announce new development opportunities across all 8 Wards.

The development team of PN Hoffman, Paramount Development, ER Bacon Development, CityPartners, and AHC, Inc. are selected for Waterfront Station II.  Hoffman’s team offered more affordable housing square footage than required by law, including in one bedroom/den and 2 bedroom family sized units that were strongly advocated for by the community.  Along the same vein, Hoffman garnered unanimous support from ANC 6D (where the project is located), which noted amongst other things their support for the cultural enhancements (adding to the already existing “incredible cultural resources” in the neighborhood) and the substantial community serving retail.  Indeed, Hoffman’s proposal includes a 10,000 square foot “black box” theatre and over 22,000 square feet of retail, including storefronts opening directly onto 4th street, expanding the commercial district further north.  In total, the project will provide more than 400 units of housing with 30% of the total units affordable and create hundreds of construction and permanent jobs.

The development team of Voltron Community Partners (Dantes Partners, Spectrum Management, Menkiti Group, Bailey Real Estate Holdings) was selected for Capitol Vista. The Voltron team will be providing an all-affordable housing project coupled with needed retail in a rapidly growing area of the city.  The 100% minority-owned, DC-based partnership has over 40 years of combined experience in multi-family development and affordable housing in the city.  Their project includes the most units of any proposal below 60% AMI which is critical to ensuring that people who have lived in rapidly growing neighborhoods can stay as their areas development.  In addition, the project includes nearly 3,000 SF of retail.  The Voltron team also will be providing new park/plaza space as a part of their proposal, meeting the community’s desire for more park space and recognizing the importance of greenspace in creating family friendly neighborhoods.  In total, the project will provide more than 200 construction and permanent jobs and generate $8.3 million in tax revenues.

The development team of Urban Green with Flywheel Development was selected for the Truxton Circle project.  Urban Green will provide an innovative, net-zero energy, mixed-use project that promotes use of public transit and bicycling.  The project will be 100% affordable with a ground floor restaurant.  It will also include a green roof and “living” green wall, which are just a few of the many things that excited community members about this proposal.  Urban Green also work to incorporate “live/work” affordable housing units to support the DC arts community.