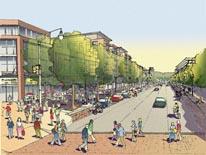 Hill East District Waterfront, formerly known as Reservation 13, is comprised of 67 acres between the eastern edge of the Capitol Hill neighborhood and the western shore of the Anacostia River. It hosted the former National Capital Medical Center campus, formerly known as DC General Hospital, now closed, the Central Detention Facility/DC Jail, and other buildings and parking lots. None of these uses made the waterfront accessible to the adjoining neighborhood. The District of Columbia plans to redevelop 50 acres of Hill East to be transformed into a vibrant, mixed-use urban waterfront community in accordance with the Hill East Master Plan approved by the DC Council in October 2002. In April 2009, the DC Zoning Commission approved the new-form based zoning codes specific to the future Hill East development. Once fully built, this new waterfront community will connect the surrounding Hill East neighborhood to the Anacostia waterfront via tree-lined public streets, recreational trails, and accessible waterfront parklands.

A Public Surplus Meeting was held on October 29, 2014. View the summary below.