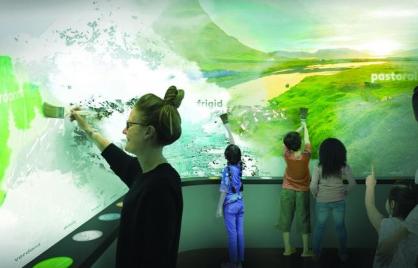 Dignitaries had quite a few soaring words to commemorate Monday's groundbreaking of Planet Word Museum, the interactive facility set to take up residence in the historic Franklin School in Northwest D.C.

But perhaps one overarching word could have been, simply, "Whew."

The museum will at long last breathe new life into a historic building that, many feel, has stood empty too long. And Franklin School will once again house an educational enterprise. True to its name, Planet Word will not contain dusty artifacts or historical relics, but instead will be home to immersive experiences designed to instill a love of words and language.

The exhibits for Planet Word, one of few voice-activated museums nationwide, will include a 22-foot-high word wall, with 3-D words that light up in response to those uttered by visitors. The museum will also offer a gallery where visitors can “paint” with words. There will be a word play puzzle room, auditorium, classrooms, a restaurant and gift shop, as well as a series of live programs, performances and events. It's all a bid to celebrate a cornerstone of democracy, organizers said, while helping improve illiteracy rates in the U.S.

The long expedition to revitalize the 50,000-square-foot building, first opened in 1869, is expected to cost $35 million. The founder and CEO of Planet Word, philanthropist Ann Friedman, who is funding the museum, said the museum's expected operating budget will be $4.5 million annually.

The lofty price tag doesn’t come without significant contributions from some notable corporate names, including a $1 million contribution from AT&T(NYSE: T). That donation was fitting — the school was the site of Alexander Graham Bell's experiments in transmitting voice through the photophone in 1880.

Friedman said the museum, designated a 501(c)(3) nonprofit, is expected to generate 60 full-time positions, including at its in-house restaurant.

Planet Word's founders hope to position it as an attraction for tourists and D.C. residents alike. Friedman estimated the museum would draw 150,000 visitors annually. One detail in its favor to meet those ambitious goals: Unlike other private museums that charge entrance fees, this museum will be free, perhaps a nod to the Franklin School's own roots as one of D.C.'s earliest examples of a free, universal public school.

It's quite a turn of events for the national historic landmark, which has stood unoccupied since 2008 and was last used as a homeless shelter.

“The building has literally been underutilized for the last 20 years, if not longer,” said D.C. Deputy Mayor for Planning and Economic Development Brian Kenner.

While the museum's exposed nails and chipped paint are a far cry from its grand expectations, Planet Word isn’t expected to open until late 2019, giving it plenty of time to freshen up. The Whiting-Turner Contracting Co. is taking on construction, while design firm Local Projects is in charge of the exhibits. Renovations will be overseen by Beyer Blinder Belle — no small job, as the Franklin School is one of only 13 buildings in D.C. awarded both interior and exterior historic landmark protection.

Friedman said the museum was inspired by a story she read in The New York Times about a math museum. “I thought, ‘That’s what I should do,’” said the former copy editor and Montgomery County Public Schools reading and writing teacher. “I was retired as a teacher, and I wanted to use my background in words and language and literacy, but I didn’t have a great idea.”