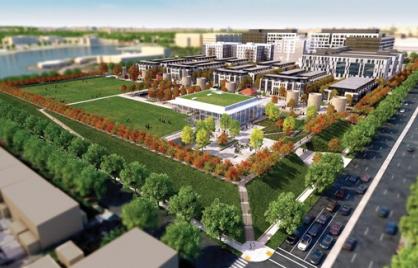 Sixteen months after a court vacated the approvals for Northwest D.C.'s $720M McMillan redevelopment, the project has received the second of two approvals necessary to bring it back to life.

This represents a significant step in reviving the project, but the development team still faces the potential for a second appeal that could delay it further before construction can begin.

The 22-page order concludes that the benefits of the project outweigh the preservation losses of demolishing sand filtration cells on the site. It determines that the project is one of special merit, and that the demolition is necessary to construct the development.

The order also addresses the issues seized on by the court and the arguments made by the opponents, a group called Friends of McMillan Park, painting them as unnecessary obstructions.

"A plan for development at the McMillan Sand Filtration Site has been actively debated for at least a decade," the order said. "Requiring the applicants to consider more or different alternatives after the long road they have travelled would be only an exercise in obstruction. The opponents have not suggested an alternative plan with even a glimmer of plausibility."

The order from the mayor's agent follows the Zoning Commission's September vote to approve the project for a second time. But the development team, consisting of Trammell Crow, Jair Lynch, EYA and D.C., is still waiting for the Zoning Commission to issue its written order. That would begin the window during which the project can be appealed again.

The development planned at the site near the intersection of North Capitol Street and Michigan Avenue NW is slated for 1M SF of healthcare space, 655 housing units, 125K SF of retail anchored by a Harris Teeter, a 17K SF community center and an 8-acre park.

The Zoning Commission and the mayor's agent first approved the project in 2015. The development team held a groundbreaking ceremony for the project on Dec. 8, 2016. The following day, the D.C. Court of Appeals vacated both approvals, preventing the project from moving forward.

The move was the second time in recent history the court has remanded a project back to the Zoning Commission, following Brookland's 901 Monroe project, which has had its approval vacated three times. The two cases sparked an unprecedented deluge of appeals that have delayed over a dozen projects and thousands of units across the District.

Twelve projects currently remain stuck that would create 3,858 market-rate units and 709 affordable units, according to a tracking page maintained by Coalition for Smarter Growth.

The D.C. government aims to break the logjam by amending the Comprehensive Plan, the overarching land-use document that guides the city's development. Opponents and the court have seized on language in the plan to delay and halt major developments. Hundreds of D.C. residents spoke at a hearing last month over the proposed changes, including people on either side of the McMillan case.

"We look forward to providing needed benefits such as affordable housing, retail amenities, job opportunities and green space to the Ward 5 community," said Chanda Washington, a spokesperson for the Deputy Mayor for Planning and Economic Development. "The decision moves a step closer as we await the conclusion of the legal process."