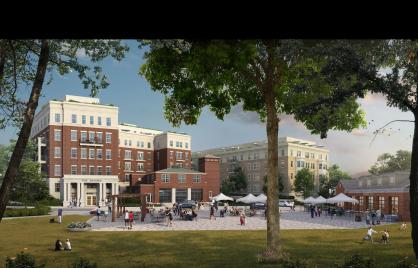 The former Walter Reed Army Medical Center site, a 66-acre parcel of land in Northwest Washington, will receive much-anticipated redevelopment that will include housing, offices and retail spaces. When complete, the site will include 3.1 million square feet of mixed-use development, including adaptive reuse of some of the historic buildings, new construction and more than 20 acres of open space.

Now called the Parks at Walter Reed, the site will host public activities this summer, and developers are announcing plans and beginning construction. Two redevelopment projects are already under construction in Building 14, which will have about 200 apartments to meet the affordable housing needs of veterans and seniors. The projects, by HELP USA and a joint venture of Urban Atlantic, Hines, 1750 K Affordable Partners and Housing Up, received support from the D.C. Department of Housing and Community Development (DHCD) and the D.C. Housing Finance Agency (DCHFA).

The first two new-construction buildings, the Brooks and the Vale, both at Georgia Avenue and Aspen Street, will include approximately 390 residential units for sale and rent along with 18,000 square feet of retail space.

Among the activities this summer are:

By the People Festival, organized by Halcyon, a local nonprofit arts and business incubator, will take place at the Parks at Walter Reed and four other venues, including Washington National Cathedral, Union Market, THEARC West and the Smithsonian Arts and Industries building June 21-24.

For more information on the Parks at Walter Reed, visit theparksdc.com.