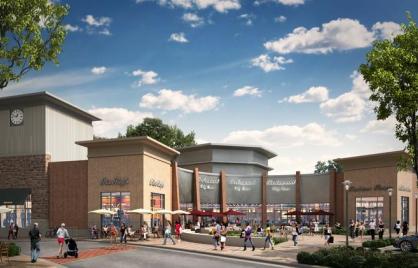 The Shops at Dakota Crossing is filling out with several national, but new-to-D.C. retailers.

While we had reported since January that they would be coming, the Trammell Crow Co. confirmed Monday it has locked down leases with three more big box retailers for the 430,000-square-foot Northeast shopping center — Dick's Sporting Goods (NYSE: DKS), PetSmart (NASDAQ: PETM) and Marshalls.

They are the last of the big box spaces available within Dakota Crossing. With those in the mix, the center will be 87 percent leased.

Dick's and PetSmart will open their first District stores at Dakota Crossing, and Marshalls its third in the nation's capital. They will join Costco and Lowe's (the home improvement giant opened its first D.C. location late last week, bringing serious competition to the Rhode Island Avenue NE Home Depot store), and a host of smaller restaurants and retailers lining a pedestrian-friendly "main street" within the center.

Partners Trammell Crow, Fort Lincoln New Town Corp. and CSG Urban Partners have started work on this third and final phase of the 44-acre Dakota Crossing. The Marshalls, PetSmart and Dick's, along with the smaller retail storefronts, are scheduled to deliver in the fourth quarter of 2016, perhaps in time for the next holiday season.

The Shops at Dakota Crossing is located within the Fort Lincoln community, just north of New York Avenue NE, nearly at the Prince George's County line. The $60 million center, which received more than $17 million in assistance from the D.C. government, broke ground in 2012 after numerous fits and starts. At buildout, it will include roughly 2,000 parking spaces.