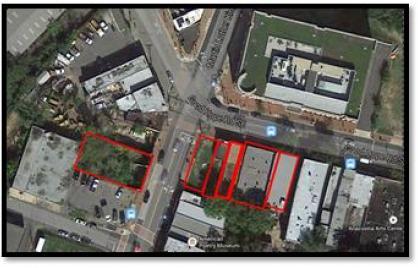 (WASHINGTON, DC) – Today the Office of the Deputy Mayor for Planning and Economic Development(DMPED) announced the selection of Menkiti Groupand Enlightened, Inc. to lead the development of MLK Gateway, a partnership between DMPED and DHCD at the intersection of Martin Luther King Jr Ave SE and Good Hope Road SE. Delivering on the Bowser Administration’s promise to provide greater economic opportunities to DC’s most underserved communities, the proposed development is expected to create a tech incubator, bring over 200 jobs, and long-awaited retail and amenities to Ward 8, establishing MLK Gateway as a destination for innovation and commerce.

“MLK Gateway gives Ward 8 a great reason to celebrate this holiday season,” said Deputy Mayor for Planning and Economic Development Brian T. Kenner.“This development delivers on our mission to drive economic development in all corners of the District so every resident can share in our city’s prosperity.  I look forward to seeing MLK Gateway reach its full potential and ensuring this historic community has access to the quality retail and jobs they need and deserve.”

The development team proposed a 100% commercial project across three sites at this marquee intersection with a total of over 50,500 sf of new development.  This will include over 28,500 sf of commercial office space and nearly 22,000 sf of restaurant, grocery, and retail space.  The development is projected to generate 50 new jobs and over $21 million in new tax revenues during its first 15 years of operation.

The site located on Martin Luther King Jr Ave SE will include a Keller Williams brokerage office with a Real Estate Entrepreneurship Career Academy and office space for Enlightened Inc.’s tech incubator – the first of its kind in Anacostia – aligning with Mayor Muriel Bowser’s commitment to make DC a national model for tech inclusion and entrepreneurship.

Specifically, the incubator will provide mentorship, training and development for the creation of local CBE technology firms while the Real Estate Academy will give Ward 7 and 8 residents the tools to enter the real estate profession and to participate in the development of their neighborhoods.

Enlightened Inc., a successful CBE technology consulting practice with a specialization in cybersecurity, will also move its headquarters from downtown DC to a new office and retail development on the Good Hope Road parcels, bringing 150 jobs to Ward 8. That site will also include home-grown retailers Filter Coffee, Good Food Markets, Smith Commons, and City First Bank.

Menkiti Group will also contribute to the vibrancy of this commercial corridor by redeveloping its own property at 1301 Good Hope Road to include a new Retro Fitness gym and office space for Menkiti Residential.  The retail amenities at MLK Gateway will bring valuable services to the Anacostia community and generate activity at this critical intersection.  Altogether, the construction of a new flagship building honors, adapts and renews the existing assets of Anacostia while providing opportunities for the future of this historic neighborhood.

Advisory Neighborhood Commission 8A supported the selection of Menkiti and Enlightened, Inc. and was especially encouraged by the substantial amount of new retail in the project. Community members were also supportive of the proposed tech incubator and real estate training program.

MLK Gateway was introduced at DMPED’s March Madness event earlier this year, an annual economic development showcase where the District announces upcoming community development projects. It is part of the Bowser Administration’s unprecedented efforts to advance long-awaited projects in the District.

Since taking office, Mayor Bowser has broken ground on a new entertainment and sports arena and infrastructure development at St. Elizabeths in Ward 8 – the first activity at the site in decades; created legislation that led to the successful transfer of 66 acres from the U.S. Army to the District, paving the way for the redevelopment of Walter Reed and creating 5,000 jobs in Ward 4; broken ground on Capitol Crossing, a $1.3 billion project in Ward 6 that will transform a seven-acre site and reunite the East End and Capitol Hill communities in the District; and led efforts to finalize a deal to ensure construction can begin on a 20,000-seat DC United Soccer Stadium at Buzzard Point.