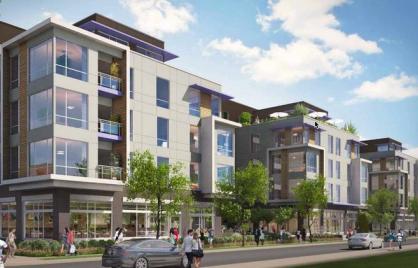 The D.C. Zoning Commission has tentatively approved a pair of developments in Park View that will redevelop a public housing project and add to the city's supply of mixed-income properties.

The zoning panel this week advanced plans for Park Morton and Bruce Monroe, a pair of projects led by the District, the D.C. Housing Authority, Parkview Community Partners, (a partnership of Dantes Partners and The Community Builders) and Torti Gallas Urban.

Park Morton is a 12-building, D.C.-owned and managed public housing project at Georgia Avenue, Park Road, Warder Street and Lamont Street NW. The 174 units there had “deteriorated to a point that requires redevelopment versus renovation,” the development team said in its application, filed in May 2016.

The redevelopment plan there calls for 189 new units, 57 of which would replace public housing units. Forty units would be for moderate income households, and the rest will be market rate.

The revamped Park Morton — a mix of 148 apartments and 41 townhouses — will be built around a central park with lawns, a pavilion and playground. A new private street will connect the neighborhood to Georgia Avenue.

Park Morton was one of four developments identified as part of the New Communities Initiative, launched in 2005 under then-D.C. Mayor Anthony Williams. The goal of New Communities was to replace public housing units one for one and integrate those units into new, mixed-income neighborhoods.

“This really is a real actualization of the new communities initiative as envisioned by Mayor Williams as far as replacing dilapidated public housing 1 to 1 and have market rate housing, revitalizing the neighborhood,” Commissioner Robert Miller said during Monday’s hearing.

He commended the developers for reworking the design concept in order to give it a "much more residential feel."

A few blocks away at the 2-acre site of Bruce Monroe Park, the zoning commission also tentatively backed the same team's Bruce Monroe project. That development will have 273 units built in two phases at Irving Street, Georgia Avenue and Columbia Road NW.

Bruce Monroe will also feature a 1-acre park, with playgrounds, a basketball court, a dog park and a community garden.

Many nearby residents spoke out in opposition to the Bruce Monroe redevelopment. More than 750 signed a petition sent to Mayor Muriel Bower and D.C. Council members.

In other development news, the zoning commission agreed to host a limited scope public hearing to address the $720 million McMillan Sand Filtration site.

In early December, the zoning commission's McMillan approval was vacated by the D.C. Court of Appeals and returned to the panel for further explanation. The commission has not set a date for the limited scope public hearing. The Mayor's Agent, whose McMillan-related decision was also vacated by the appeals court, will have an additional hearing with the Historic Preservation Office on March 10.