D.C. United just broke ground for its new stadium. That only took, um, a decade or two.

Time from shovels in the ground to fans in the seats: an estimated 14 months. 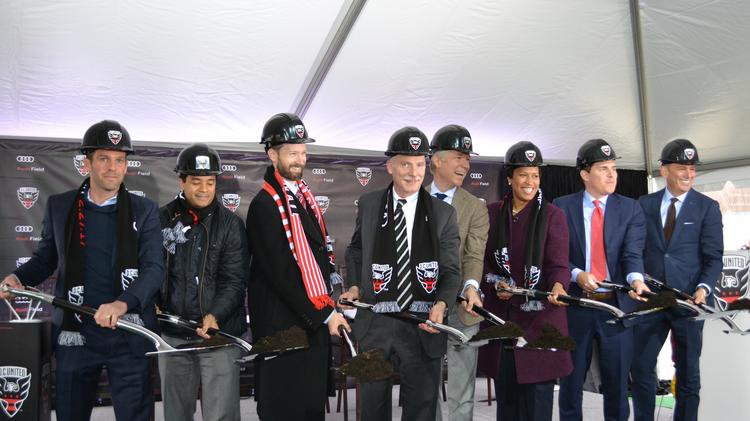 It’s been a long road to the $300 million stadium. Team officials referenced the timeline as 21 years (since the team was founded and began playing at aging RFK Stadium) or 13 years (since it proposed a stadium at Poplar Point) or five years (since talk about the Buzzard Point site began) or one year (since applications were filed with the D.C. Zoning Commission). Oh, and let's not forget that abandoned plan to build in Prince George's County.

In any case, the time is now.

“There is maybe no better time, in our nation’s capital, to build a cathedral, a mosque, a house of worship for the game of soccer,” said D.C. United Managing Partner Jason Levien.

The stadium — which will be built at Second, T, and R streets and Potomac Avenue SW, just across South Capitol Street from Nationals Park — received final approval by the Zoning Commission on Feb. 16. A day prior, the team announced a multiyear deal with Audi for stadium naming rights. Audi is reportedly paying about $4 million a year for 10 to 15 years.

Bowser said she was “thrilled to put together a fantastic package” for the team to have its own home in the District. D.C. United, working with Populous, Marshall Moya and Turner Construction Co., will put up $150 million to build the stadium. The city is funding the remainder through land acquisition, cleanup and infrastructure.

Bowser engineered a new deal for the location after her predecessor, Vincent Gray, had proposed a swap with Akridge for the Reeves Center at 14th and U streets NW. She nixed that and the city seized the site for the stadium by eminent domain; that case case is pending.

Monday’s groundbreaking was actually the second one for the stadium. In April 2016, some of the same principals— Levien, Bowser, Kenner— gathered for the ceremonial demolition of an old metal shed as the city began site preparation work on what was surface parking lots in a highly industrial stretch near the Anacostia River.

The new stadium is expected to generate $1 billion in economic activity, said Kenner. It will also create hundreds of construction and permanent jobs and add hundreds of millions of dollars in tax revenue, he said.

Part of that will come from upcoming development around the stadium. There are several mixed-use plans in the works: