D.C. sells Skyland Shopping Center a decade after seizing it 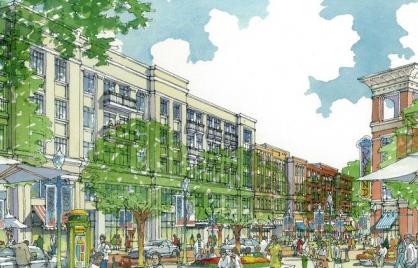 A decade after seizing much of the property through its eminent domain authority, the District has sold the Skyland Shopping Center in Southeast to the development team that will undertake its transformation.

Having finally put all entitlement issues behind them — Safeway’s covenant, eminent domain, the Wal-Mart lease — Mayor Muriel Bowser's administration delivered the 18.5-acre property to a joint venture led by The Rappaport Cos., WC Smith and the Marshall Heights Community Development Organization. The purchase price: $700,000.

“Looking back in my files, I note that we started discussing putting our team together to respond to the RFP to develop Skyland in the late Fall of 2001 — fourteen years ago,” Gary Rappaport, CEO of The Rappaport Cos., told his staff in an email message delivered Friday. “Previous to deciding if we should be part of the dream for Skyland I was giving speeches around the United States telling developers and retailers that we should invest our time and money in the challenged areas of our cities. [That] process was complicated and time consuming but there was an opportunity to help others as well as have financially successful developments. Skyland fit right into what I was talking about and when I was told about Skyland I decided it was the perfect project to become involved with.”

The sales price represents the fair market value of the property, D.C. leaders told the D.C. Council in 2013. At the time, even then-Councilwoman Bowser questioned the amount (though she did vote for the bill that authorized the sale), asking, “Are we paying them to take the property off our hands?”

Today, her administration describes the project as a big win for the Ward 7 community.

“This is yet another example of how the Bowser Administration continues to pile up wins for residents in all 8 wards,” Joaquin McPeek, spokesman for the Office of the Deputy Mayor for Planning and Economic Development, said in a statement. “Skyland is a catalytic project because it checks all of the boxes for creating pathways to the middle class — job creation, affordable housing and much-needed community-focused retail. We are excited to move forward on this long-awaited project.”

The Skyland Town Center, located at the intersection of Good Hope Road, Alabama Avenue and Naylor Road SE, will include 200,000 square feet of retail and 267 units in the first phase, and roughly another 210 units and 142,000 square feet of retail in a second phase. The development team has compiled a diverse mix of funding sources — $55 million in EB-5 foreign investment, a $7 million D.C. grant and $40 million in tax increment financing, among them.

Site work for the first phase is well underway, and vertical construction is scheduled to begin early next summer. The Wal-Mart is expected to open in 2018, along with the first run of multifamily units. You can watch the construction, via webcam, by clicking here.

“While I did not think it would take fourteen years to purchase the land and probably another six or more years before it will be fully developed, I would step up and make the same decision today even if I knew it would take so long to complete,” Rappaport said in his message to staff.