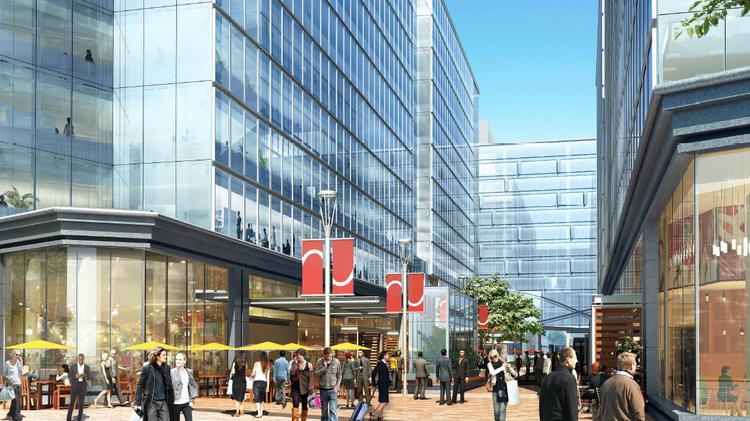 Property Group Partners is weighing alternate uses for a part of its $1.3 billion Capitol Crossing — a mix of uses atop Interstate 395 — that was previously planned for residential.

PGP recently pitched D.C.'s economic development office on a proposal to provide about 100 affordable units at an alternate site west of Nationals Park. In return, PGP wants permission to build something other than affordable housing on a piece currently marked for a 150-unit multifamily building on its 2.2 million-square-foot Capitol Crossing development, which sits near Union Station.

The off-site units would be affordable to residents making between 30 percent and 50 percent of area median income, a greater level of affordability than the 80 percent-of-AMI the developer previously agreed to as part of a 2010 accord.

Sean Cahill, senior vice president of development for PGP, declined to disclose what other uses or users are being considered on site because the developer is still in negotiations with prospective tenants. While some sources have told me a hotel could be in the works, Cahill declined to say whether that is being explored. At the same time, he said the developer is willing to commit to provide more affordable housing, sooner, in a part of the District where it is in short supply.

"We're in support of the mayor's agenda to increase the number of affordable housing units that are available in the District of Columbia," Cahill said. "That's kind of what we're working toward, not so much as a ground-up developer of Capitol Crossing but as developers in the city of Washington, D.C."

D.C. Council Chairman Phil Mendelson, on Mayor Muriel Bowser's behalf, introduced legislation in mid-December cementing the affordable housing component of PGP's proposal — that the number of units would be doubled from 50 and moved to 1530 First St. SW. The legislation provides no specific details about what else might be developed at Capitol Crossing. The bill was referred to the council's committee on business and economic development, where it is pending further action.

It's not the first time PGP has floated the idea of nixing the affordable housing piece of Capitol Crossing. The developer raised the prospect after its exclusive negotiating rights with Georgetown University's law school, which would have included student housing, lapsed in 2016.

The residential component is only a small piece of the larger Capitol Crossing development, and other pieces of the office-heavy development are proceeding. That includes 200 Massachusetts Ave. NW, a 406,000-square-foot office building slated to deliver later this year with the American Petroleum Institute signed on as its first tenant.

The site is not part of the four clusters the District included in its pitch to host Amazon.com Inc.'s second headquarters, but Cahill said PGP suggested to D.C. leaders that Capitol Crossing could play a role in that larger requirement if D.C. wins the competition.

"What’s good for us is that they are looking at three places, three opportunities in the region. And so obviously, for any one of the three, all boats rise with that as a regional outlook," Cahill said. "We would have that ready for occupancy well within the time frame that they would be looking for."

Capitol Crossing's current mix is governed by a planned-unit development approved prior to Bowser's administration, and its terms did not include a definitive timeline to build the residential piece, said Sarosh Olpadwala, director of real estate for the office of the Deputy Mayor for Planning and Economic Development. The proposed change would emphasize building the off-site affordable housing sooner rather than later.

While the District has pushed back against developers proposing to meet affordable housing requirements by building off-site, Olpadwala said PGP has agreed to provide more affordable housing units, at deeper affordability levels, than initially required — all still in the same ward as Capitol Crossing. Olpadwala declined to disclose PGP's potential alternative uses for Capitol Crossing.