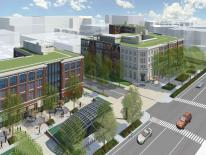 Hill East District, formerly known as Reservation 13, is comprised of 67 acres between the eastern edge of the Capitol Hill neighborhood and the western shore of the Anacostia River.

The District of Columbia’s Office of the Deputy Mayor for Planning and Economic Development (“DMPED”) plans to redevelop 50 acres of Hill East to be transformed into a vibrant, mixed-use urban community in accordance with the Hill East Master Plan that will create an unparalleled riverside experience. Once fully built, this new waterfront community will connect the surrounding Hill East neighborhood to the Anacostia waterfront via tree-lined public streets, recreational trails, accessible waterfront parklands and some of the most exciting and historic neighborhoods in the area. DMPED anticipates a multi-year, multi-phase development approach to fully realize the vision in the Hill East Master Plan.

After years of planning and engagement with the Hill East community and following the closure of the DC General Homeless Shelter, the developer broke ground on the first building on Parcel G-1 in April 2018, which will deliver 262 residential units (31 affordable units) and over 12,000 square feet of retail space this fall. The developer will break ground on the second building on Parcel F-1, a residential community of 100 Permanent Supportive Housing (PHS) units to support very low-income families and over 12,000 square feet of retail space, in the winter of 2020.

As part of the Phase II development process, DMPED announced July 30, 2020 that it is starting the surplus process for eight (8) parcels located on the Hill East site. The actual mix of parcels offered for the Phase II redevelopment will be determined at a later stage through a separate RFP process.

Pursuant to DC law, the District must surplus properties prior to making them available for disposition and redevelopment. For Phase II redevelopment, DMPED is beginning the surplus process now and as part of the new equitable development focus, intentionally providing a longer notice period to businesses interested in participating in these developments but who might need extra time to find, discuss, and secure teaming partners and arrangements. This process will help maximize teaming opportunities and prioritize equity inclusion in the selection of development teams as well as create affordable housing, retail, and job opportunities across the District.

Surplus and Disposition (Phase I)