Washington DC‘s area universities is one of the most vital components of the District’s economy.   The university system includes over 11 colleges and universities serving as major employers and innovation centers and supports over 30,000 jobs. (BLS 2014)  The District boasts one of the most educated populations in the country with nearly 50 percent of its residents obtaining a bachelor's degree or higher.

District universities are represented by the Consortium of Universities of the Metropolitan Area, which seeks to promote the mission of its members to improve the educational, scientific, cultural and literary knowledge and experiences of students through collaboration and cross-campus partnerships. During the academic year, nearly 80,000 students or one in six District of Columbia residents attend college at a DC Consortium university. The economic impact of the Universities in the District alone approaches $2 billion. As a sector, it is the largest employer and one of the largest in terms of businesses, and governments around the world (Consortium).

With 10 hospitals, the District has experienced a major increase in health care employment, more notably responsible for 8.9 percent of District jobs. The largest hospital is the MedStar Washington Hospital Center with neighboring health institutions such as the Children’s National Medical Center, MedStar Rehabilitation Hospital and the Veterans Affairs Medical Center. In addition, the District has the George Washington University Hospital and Georgetown University Hospital, Howard University Hospital where academic institutions have the opportunity to merge with health care to provide innovative approaches to medical care. 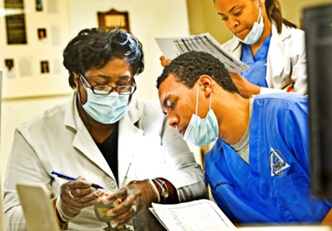 Key District-based hospitals include the following:

To see how you can become apart of our story, please contact: