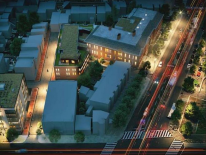 The Grimke School was first built in 1887. It was originally called the Phelps School and re-named in 1934 after Archibald Grimke, a highly regarded race and community relations diplomat, journalist, activist, lawyer, and President of NAACP of Washington, D.C. The building is designated as a contributing building to the U Street Historic District. It was converted to an office building for government agencies in the 1980s and most recently served as headquarters for the D.C. Department of Fire and Emergency Services (FEMS) and the Department of Corrections. It has been vacant since 2013.

In 2013, the Council of the District of Columbia passed the “African-American Civil War Memorial Freedom Foundation Inc. Museum Development Act of 2013” requiring that any redevelopment of the Grimke School provide for the “exclusive use, renovation, and expansion of space not less than 10,000 square feet for the establishment and operation of an African American Civil War Memorial Museum and Visitor’s Center” (Sections 2132 to 2134 of D.C. Law 20-61). The legislation is included in the Fiscal Year 2014 Budget Support Act of 2013 (see link below).