Who will develop the last of the Waterfront Station parcels? ANC makes its choice 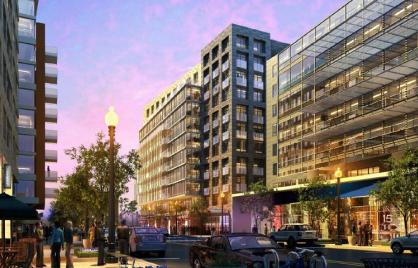 Neighborhood leaders representing the Southwest waterfront area area have picked a favored team to tackle the last of the D.C.-owned Waterfront Station parcels.

Advisory Neighborhood Commission 6D, whose voice is, in theory, to receive "great weight" as the District weighs its choices, has selected a team led by PN Hoffman (a co-lead developer of The Wharf on the Southwest waterfront) and AHC Inc. to develop the 59,000-square-foot parcel at 1000 Fourth St. SW.

"The applicants have shown exemplary commitment to the Southwest Community and their highest profile development hasn’t even yet opened," the ANC writes in its resolution supporting the Hoffman-AHC bid. "They are locating their headquarters in Southwest. Their leadership already lives here or will become Southwesters once they receive certificates of occupancy for 525 Water and VIO [both at The Wharf]. While other developers have built and flipped for quick profit, the applicants are committed to the overall development of Southwest both as anchors of our major development at The Wharf and as founding members of the new Southwest BID."

Two other teams are still very much in the running. They are:

Per ANC 6D, PN Hoffman got the nod for its promise to develop the neighborhood as a cultural destination, for the amount of retail it provided ("more retail is better if we are seriously committed to reestablishing a thriving town center"), and for the amount of truly low-income, affordable housing it offered in its plan.

The overall Waterfront Station includes twin office buildings at 1100 and 1101 Fourth St. SW, the Lex and Leo apartments(formerly Sky House East and West) at 1150 and 1151 Fourth, a new mixed-use building from Forest City Washington and Vornado Realty Trust at 1001 Fourth, and future office buildings at 375 and 425 M St. SW.

The Office of the Deputy Mayor for Planning and Economic Development is expected to make its pick for the last Waterfront Station parcel next month.