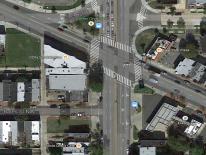 The Truxton Circle site (Lot 0842 in Square 0615) is an approximately 0.11 acre, vacant parcel located at 1520 – 1522 North Capitol Street, NW, in the Truxton Circle neighborhood of Ward 5(“Site”). The Site is bounded by North Capitol Street, NW, to the east, Bates Street to the north, row-houses to the south, and an alley to the west. The New York Avenue/NoMa-Gallaudet University Metro station is a few blocks southeast of the Site.

A Request for Proposals (RFP) for the Truxton Circle parcel was issued on April 17, 2015. The submission deadline for proposals was May 29, 2015. On March 25, 2016, the Office of the Deputy Mayor for Planning and Economic Development (DMPED) awarded the exclusive rights to negotiate the redevelopment of the parcel to the development team comprised of Urban Green, LLC and Flywheel Development.