City to hand over Buzzard Point land to D.C. United, but stadium work will run into ’18 season 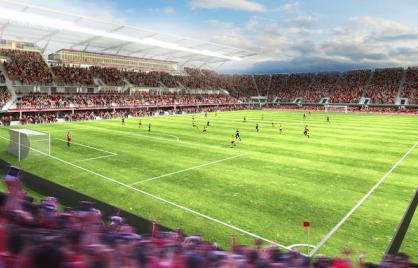 This weekend, the District government will hand over the Buzzard Point property that D.C. United needs to build a soccer-specific stadium three blocks from Nationals Park.

The MLS club is slated to play its final match at RFK Stadium next fall and move into the new complex in 2018 — a transition at the heart of the club’s season-ticket marketing campaign.

Based on construction projections, however, United probably will not play its first home game there until June of ’18, three months into the season. Accordingly, the league is prepared to schedule numerous away matches before United is able to christen the new digs.

United officials face a D.C. Zoning Commission hearing Nov. 2 and are aiming to break ground this January or February. Optimistically, they believe they can complete the project in 14 months. Realistically, they’re looking at 16 months to finish a venue that will offer approximately 19,000 seats, 32 suites and standing-room-only tickets during sellouts.

It’s unclear how any possible delays along the way at Buzzard Point would further impact the 2018 schedule.

United officials have no plans to play any games after next season at city-operated RFK, where team investors have burned through cash since the team’s inception in 1996. In essence, United would accept an uneven schedule in order to play the entire 2018 home slate at Buzzard Point. The new stadium will provide greater revenue streams and a better game-day experience than shabby RFK, which opened 55 years ago Saturday with a Redskins-Giants game.

Had the new stadium opened June 1 this year, United would’ve had to start the season with 13 consecutive road games. (Overall, MLS teams play 17 away matches.)

Even if MLS were to lighten the early-season load, United would still probably face a 10-game away stretch. And 2018 is a World Cup year, which means the league will pause for a few weeks in June, constricting the available dates on the league calendar.

United wouldn’t be the first MLS team to start the year on an extended road swing — it has occurred seven times prior. The longest away block was 10 games by Sporting Kansas City in 2011.

Five teams have played at least seven matches on the road while awaiting the completion of a new stadium. In addition, in each of the last two seasons, Toronto FC has gone on the road while BMO Field underwent expansion and renovations.

Here’s how those teams fared before their first home game:

Details and updates on the Buzzard Point project: