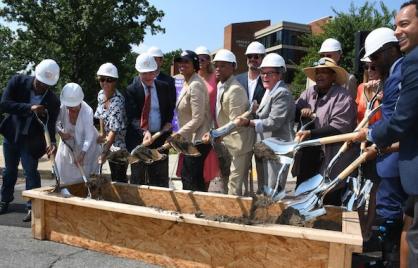 On Monday, D.C. Mayor Muriel Bowser celebrated the groundbreaking of Abrams Hall Senior Apartments — an 80-unit housing community designated for senior citizens that will be built on the campus of the former Walter Reed Army Medical Center, now The Parks at Walter Reed, in Ward 4.

“As the District continues to grow and prosper, my administration is focused on ensuring our seniors have the supports and resources they need to live and thrive across all eight wards,” Bowser said. “Whether it’s through property tax relief or more affordable housing, we’re building pathways to the middle class for our seniors and finding new ways to keep D.C. affordable for longtime Washingtonians of all ages and backgrounds.”

The new senior apartments will be building in Building 14 of the former Walter Reed Army Medical Center campus, originally constructed in 1976 as barrack housing for soldiers receiving long-term medical care and able to live semi-independently. In May, the Bowser administration also broke ground on 77 units for formerly homeless veterans at Abrams Hall. Upon completion, Abrams Hall will be a 100 percent affordable housing community with approximately 200 units.

“We committed to repurposing the historic Walter Reed campus in a way that creates the types of housing and resources the community needs and that includes safe and affordable apartments for seniors,” said Deputy Mayor for Planning and Economic Development Brian Kenner. “I look forward to coming back and welcoming seniors to their new home on Walter Reed.”

The project, supported by $9.7 million from the Department of Housing and Community Development’s Housing Production Trust Fund and a $168,000 grant from the Department of Behavioral Health, allocates four of the PSH units to residents on the Housing Eligibility and Assessment List currently experiencing homelessness or transitioning from institutions.

Additional financing for the project will be provided by Citi, Freddie Mac and SunTrust Community Capital. Urban Atlantic, Hines, non-profit Housing Up and 1750 K Affordable Partners (a CBE joint venture comprised of Evergreen Urban and Blue Sky Housing) have been chosen to develop the project.

This site will also be the home for The Parks at Walter Reed’s first office tenant, Housing Up, one of the development partners for the project. At Abrams Hall, Housing Up’s 60 employees will provide case management, training and resources to approximately 600 homeless and low-income families, with additional duties that include the support for residents of Abrams Hall Senior Apartments, consultation on resident services and asset management.

The Parks at Walter Reed redevelopment, which will be phased over a 10-15 year period, serves as the result of a successful community-driven process originally initiated and led by the Mayor while serving as a member of the D.C. Council.

In 2016, the U.S. Army officially transferred 66-acres of the Walter Reed Army Medical Center campus to the District, making way for the development of The Parks at Walter Reed. Over the next 30 years, The Parks at Walter Reed will generate 5,000 jobs, 2,100 units of housing, 432 of which will be affordable housing units and nearly $1 billion in tax revenue. The project has already delivered two community-serving benefits: In February 2018, Mayor Bowser cut the ribbon on the DC Fire and Emergency Medical Services Engine Company 22 and in September 2017, the DC International and LAMB Schools opened for their first school year in the former Delano Hall.

Since coming into office, the Bowser administration has sparked the creation or preservation of more than 10,800 affordable units, with another 5,200 in pre-construction. In addition to making unprecedented investments in affordable housing, the administration has also increased investments in permanent housing programs by nearly 62 percent and connected more than 3,300 single adults to permanent housing.