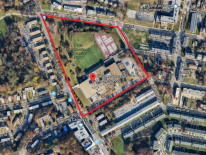 Project Profile:
This site provides a unique development opportunity in a prime location. Fletcher-Johnson is located in the heart of Ward 7.

Fletcher-Johnson is positioned several blocks north of the Marshall Heights neighborhood, south of the KIPP DC Benning Campus, west of the DMV and Benco Shopping Center and east of the Maryland State line.

Fletcher-Johnson closed in 2008, though portions of the building were previously leased to public charter schools and the facility was last used as a swing space for HD Woodson HS during its modernization. The building has been vacant since 2011.

DME previously released an RFO and evaluated offers for the school in 2014, however no award was made. Prior to restarting the RFO process in 2017, DME confirmed that DGS could not immediately identify other government use for Fletcher-Johnson in the near-term. DGS offiicialy surplused the property in 2019, making it available for disposition by DMPED.

The site offers a unique opportunity for the District to reshape a long languishing property into a benefit for residents and the city as a whole. Previous public input into the redevelopment plan has been extensive and widespread; resulting in various community preferences for the site.

The Office of the Deputy Mayor for Planning and Economic Development (DMPED) issued a Request for Proposals (RFP) for Fletcher-Johnson on July 2, 2019. Submission deadline was April 20,2020.

DMPED held  an information session and introductory site visit on Wednesday July 24th, 2019 and August 21, 2019. See Questions and Answers below in related content.