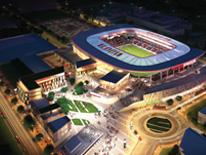 On December 30, 2014, the DC Council formally approved the District of Columbia Soccer Stadium Development Act of 2014, which paved the way for a new state-of-the art soccer stadium in the Buzzard Point area of Ward 6.

On September 30, 2015, the District filed for eminent domain to acquire site control at Buzzard Point in preparation for construction of a new soccer stadium.

On April 25, 2016, the District and D.C. United joined for an infrastructure groundbreaking in preparation for the new soccer stadium at Buzzard Point.

The project is expected to generate significant benefits to the District, including $1 billion in economic activity, support over 900 full-time equivalent jobs, and generate $64.7 million in fiscal benefits. The 20,000-seat facility is planned to open prior to the 2018 season.